It was February of 2018 and I was just piling off a flight from Vancouver to Palm Springs when I received a call from Steve Rennalls at Islander Reels. I’ve been lucky enough to be on the pro staff with Islander Precision Reels for the past couple of years and have always been proud to rep a Canadian reel company, but hadn’t done a ton of work with them. That was all about to change…

“Hey Yos, is this a good time, it’s Steve from Islander?”.  It wasn’t really a good time, I was lugging a crazed 2.5 year old through US Customs.  “Hey you want to go fishing in Argentina this October?” he said.

“What!? Your bet I do!” I said “but I gotta run, I just landed in Palm Springs but will call you later.”  And that was it, I was going to Argentina. On the way out the rental car my wife looked at me and asked who had called.  “Oh that was just Steve Rennalls from Islander Reels, he asked if I wanted to go to Argentina in October and I said yes, isn’t that awesome babe?”

“Awesome? Umm are you stupid? Our second baby is going to be 6 weeks old.”

Well I went. It was awesome. And everyone is still friends.

The trip we were in for was to be a two parter. We’d fly to Buenos Aries, overnight there and then head north, to the Parana River and the Golden Dorado River Cruiser. We’d then come back to Buenos Aries, and fly south to the town of El Calafate in southern Patagonia, then trek north to Estancia Laguna Verde, one of two lodges on the world famous Jurassic Lake, or as it’s called in Argentina, Lago Strobel.

The plan was to leave on the 18th of October, returning home on the 5th of November, having about three weeks of exploring and fishing in Argentina. On the trip were two other guys I had never met. Lael Johnson of Lynnwood Washington and Andy Sneddon of Vancouver Island. Lael is the owner of LPJ’s Guide Service operating salmon and steelhead trips in Washington state’s Olympic Peninsula. He’s also the founder of Bait Ballz, more on Lael later. Andy Snedden is a custom rod builder in Victoria BC and operates Custom Rod Building Supplies. Andy builds a series of mooching rods for Islander Reels and is well connected with the two lodges we were to visit in Argentina. Having been to Argentina on many occasions Andy was a wealth of knowledge and was there to keep Lael and I in line. The purpose of the trip was to better solidify the relationship between Islander Reels and the two lodges, but also to get some media content from the two unique properties, with Islander Reels being put to the test with feisty Golden Dorados that the monster rainbows of Jurassic Lake.

This was my first time traveling to Argentina, I had a semi decent idea of the two fisheries I was headed to, some Youtube sleuthing and chatting with friends who had been to Argentina was about the extent of it. I was wrapping up a busy summer guiding at Langara Island Lodge and running our Fall salmon fly fishing program on BC’s southern coast. I didn’t exactly have a ton of time to get things ready.

Scramble packing was about as good as I did, two big MEC duffle bags, that could fit travel rods were stuffed with a bunch of things I thought I’d need and some suggestions from Andy, who was well versed in the necessities to bring along. I’ll put together a full packing list of what I learnt you should bring Golden Dorada fishing and for Jurassic Lake fishing in a separate blog post. For now I stuffed the bags with waders, boots, fly boxes, camera gear, a drone, some t-shirts toothbrush, a pair of shorts and some underpants.  The extra space was filled with Chromer t-shirt and hats, who doesn’t love some shwag right?!

October 18th came pretty quick. Before I knew it I was rolling through US customs headed to Houston Texas. Houston is where the three of us, Andy, Lael and myself would meet and where we’d board to fly the 10 hours to Buenos Aries. It was game five of the World Series, Boston and LA was on all the screens when we touched down in Houston. Lael and Andy were already there, posted up at the airport bar for the first of just a few round of drinks we’d have together over the next three weeks.

Traveling with two guys I had never met and didn’t know wasn’t something I had done since going to camp back in 1989. Fishing always has a weird way of bringing together weird people. The flight from Houston to Buenos Aries was about 10 hours, I got on, sat down, passed out and was touching down for my first time ever in South America before I knew it. Slightly panicked as I hadn’t filled out the customs form and heeding the warnings of Andy that Argentinian customs could be a bit tough, I filled out the form as we piled off the plan.

Ezeiza International Airport is the main airport in Buenos Aries, its big and orderly and we rolled through customs without a hitch, except the customs agents had no English and I had no Spanish but I told them I was going fly fishing at Estancia Laguna Verde and the agent smiled, nodded his head and stamped my passport.  We grabbed our bags, there was one more security checkpoint to X-ray all the bags leaving the airport that supposedly could cause some issues, I don’t think anyone even looked at the bag as it rolled through and boom, there we were, home free in Buenos Aries Argentina!

Made it to Buenos Aires Argentina, hanging with my new buddy Lael Johnson waiting for our bags.

Made it to Buenos Aries

There are two ways of getting a taxi at Ezeiza International Airport. The smart way or the other way. As Andy had traveled to Buenos Aries on a number of occasions he was versed in both and lucky for us went the smart route which was ordering one from a taxi stand inside the international arrivals and having them walk you out to the cab and prepay.

With three of us and a pile of gear, including what might have been a world record sized suitcase brought by Lael, the taxi was pretty tight, but the guys made it work and we headed into the city. Buenos Aries has a population of about 15 million people and the airport is about 40+ minutes from town, depending on traffic. On the day we arrived traffic was light and we were in the Palermo district in about 45 minutes. The warm breeze felt good through the windows and the taxi driver rolled through lanes and flew through the tolls.  We stayed at the world famous (insert sarcasm) Alpino Hotel in the Palermo district of Buenos Aires. This is a nice neighbourhood in the city centre, I’d stay in this area again, but might skip the Alpino Hotel in favour of something a bit more upscale.

So we made it, one time, in one piece, with all our luggage. Would the rest of the trip Islander Reels Argentina adventure go as smooth? Find out in the next post when we head to the Golden Dorado River cruiser and hang our with Hueso, Dario and the rest of the boys on the Parana River. 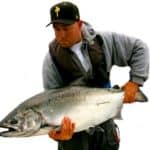