HOW TO FIND BEST BC STEELHEAD FISHING TRIPS

It’s no secret British Columbia is home to the best wild steelhead fishing found anywhere in the world. Our famed rivers on BC’s south, central and north coast host hard pulling aggressive steelhead, the type dreams are made out of!
Understandably there are a lot of options when it comes to a BC steelhead fishing trip. That’s where I hope this page can help you out and answer some of your questions and get you set up for a trip that suits you. I’ve been a steelhead guide for almost 20 years in British Columbia and my crew and I have fished and guided extensively throughout the province. We’re happy to help you get set up and booked into a first-class trip, simply send me an email or have a look at our list of BC steelhead fishing destinations and use any of the contact forms to reach us directly.

Email me about a BC Steelhead Trip

WHERE TO GO STEELHEAD FISHING IN BC

British Columbia is an interesting destination for a steelhead trip. We have steelhead fishing 12 months of the year. There’s always somewhere that offers some type of fishing opportunity, obviously some places and times are better than others. Below is a condensed breakdown of where to go steelhead fishing in BC…

This is the most popular area for a trip. When we talk about Northern BC steelhead the focus is generally on the Skeena River system and its tributaries. This area has the best fishing from August to early November. These are Summer-Run steelhead, more on the different runs of steelhead below. The Skeena River drains the majority of northern BC and is the last stronghold of wild salmon & steelhead found anywhere in the world. The most famous tributaries of the Skeena system include the Copper, Kalum, Kispiox, Babine and Bulkley rivers. If you are looking for the best fishing in BC, then Northern BC is where you’ll want to plan a trip. There are guide services and lodges on all major systems and accessing the area is fairly easy, with direct flights from Vancouver to the towns of Terrace and Smithers, the two epicentres of steelheading in northern BC.

Vancouver Island has runs of Winter steelhead that enter the rivers starting in December. The majority of Vancouver Island steelhead are in the systems by February. Conditions play the biggest factor in run numbers, low water and cold temperatures make for difficult fishing. The optimal time to fish on Vancouver Island is when conditions warm slightly and river levels begin to rise. This is the case with almost all winter steelhead fishing locations. Haida Gwaii, a series of islands on BC’s northern coast also offers good fishing during the Winter months.

You don’t always need to travel far to find some good steelhead fishing in BC. During the Winter and Spring months you can fish the Squamish and Vedder rivers, both close to Vancouver. These are two very different fisheries, but will afford you the opportunity at a chrome BC steelhead. The Squamish lends itself well to fly anglers and the Vedder River is a popular destination for both fly and conventional gear anglers looking for the best steelheading close to Vancouver.

A KEY TO SUCCESS

Easier said than done but timing your travel is easily the most important part of putting together a successful steelhead trip to BC. The window of opportunity isn’t always as wide as we’d like it to be, some river systems have a few weeks when fishing them is worthwhile, while others enjoy longer seasons and runs of fish that are more spread out.

When trying to time a steelhead trip right you want to look at the history of the particular river you’re planning on fishing, its levels and when the biggest pushes of migrating steelhead are making moves. Obviously there are lots of factors out of your control, weather being the major factor, which effects river levels. Hitting rivers at their optimal levels is the key to good timing. 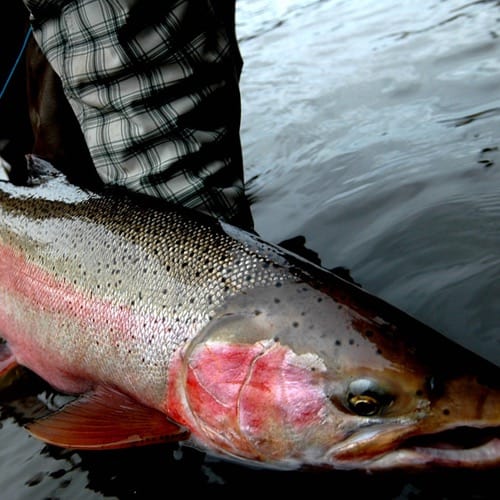 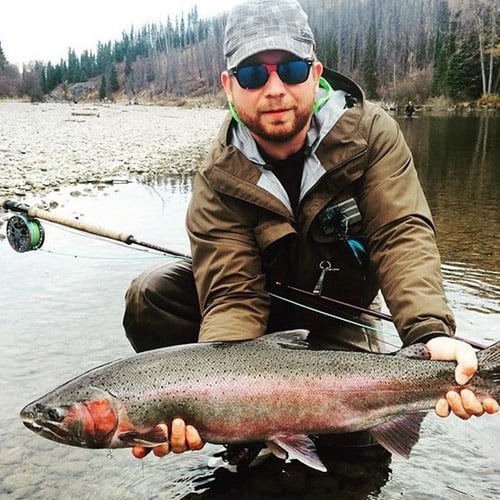 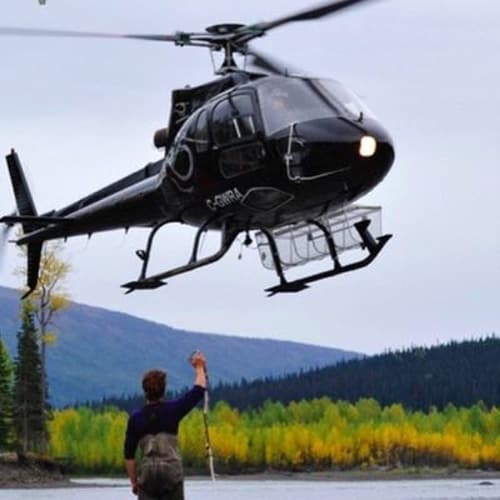 Winter-run steelhead return in much smaller numbers and targeting them can often be a trying pursuit. These fish enter the coastal river systems of British Columbia starting in late November, with peak run times being from December through to early May, all depending on location of course.
Vancouver Island is well-known for its winter-run steelhead rivers, including the famed Gold on the island’s west coast, as well as the Nimpkish and the Salmon in the north and the Cowichan and Stamp on the southern east coast of Vancouver Island. There are also winter-run steelhead on the south coast mainland of British Columbia, with fish returning to the Squamish River north of Vancouver and the Vedder River east of Vancouver. These generally are small runs of fish, the Squamish run of winter steelhead is usually under 1500 returning fish. The most remote winter-steelhead location is Haida Gwaii, a chain of islands off of BC’s north coast that is home to some interesting steelhead rivers, the most well known being the Yakoun River.
Winter steelhead fishing is usually pretty hit or miss with a huge dependancy on river levels and water conditions. Cold weather brings freezing levels down, clearing up rivers and making for low water conditions. This often restricts steelhead from entering the system or makes them very wary of what is being presented to them. Too much winter rain blows rivers out, pushing fish down and shutting them off from chasing flies. To hit it right requires some good luck and some local insight, that’s where guys like us come in. If you’e thinking of a winter steelhead trip just remember these are usually trips focused on finding one or two fish a day at most, certainly not trips that will post big numbers.
If you’re looking for a Winter challenge, check out these three of our favourite Winter-Run steelhead opportunities in British Columbia… 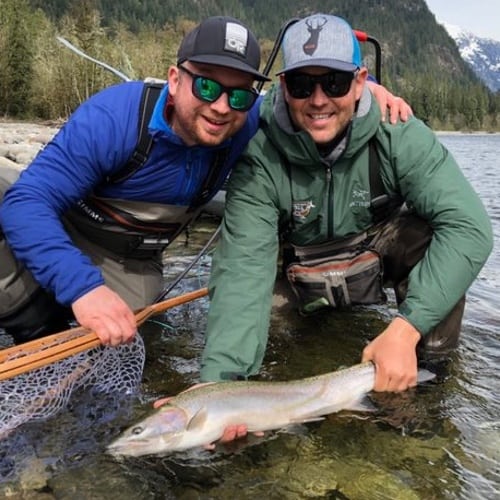 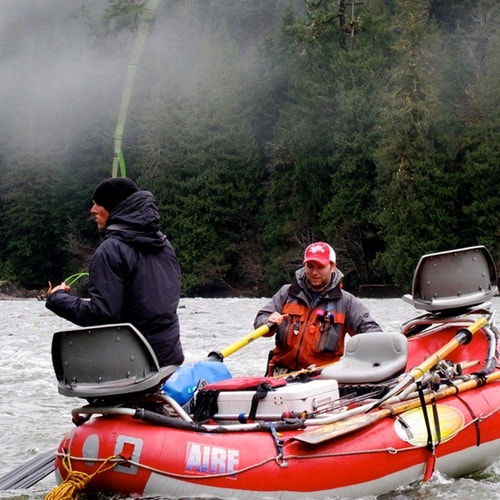 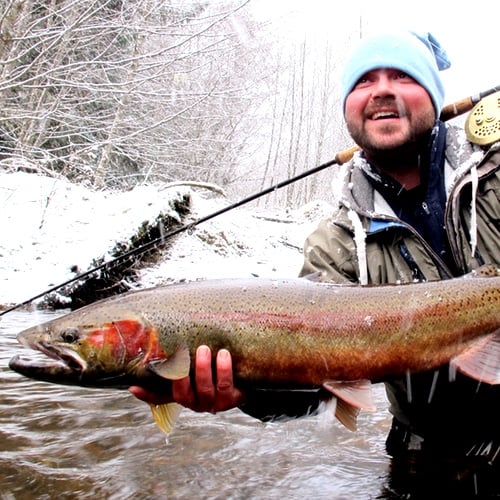 HOW DO CLASSIFIED RIVERS WORK IN BC?

Some rivers are considered classified, some are not. This is a classification put in place by the government with the goal of protecting these rivers and limiting the amount of guiding on them and in portion to gain extra license revenue from anglers who are fishing on these rivers. Some rivers are classified for certain months of the year and not for others.

A very general rule is most of the Skeena watershed is classified, the Dean River is, the Yakoun is and obviously a bunch of others. If the river has had hatchery implementation it is generally not classified and most rivers on Vancouver Island and southwestern BC are not classified. We stress that this is a very general outline, check with the regs to see if the river you’re fishing is.

It is important to keep in mind that as of April 2012 there are regulations in place on certain rivers in the Skeena watershed that prohibit non-Canadian anglers from fishing on the weekend without a guide. These regulations have been met with mixed reviews, but they are law, so if you’re not fishing with a guide it’s a good idea to look at this PDF.

TIPS ON GETTING YOUR BC FISHING LICENSE

If it’s your first time buying a fishing license in British Columbia it might seem a bit confusing. Don’t worry, it really isn’t. All licensing is done online now and the website walks you through it as best as it can. You can visit the BC government license page here. All you have to know is if you plan on fishing for steelhead in BC there are three parts to buying a license.

First part is buying your Non-Tidal (freshwater) Basic Fishing license. You can buy a one-day license, an eight-day license or an annual license. License costs depend on where you are from. Residents are considered people living in British Columbia, non-residents are considered Canadian residents not living in British Columbia and non-resident aliens is everyone else. If you’re from the US you’ll be buying a non-resident alien license.

Second part is buying your Steelhead Conservation License. You need this license if you’re targeting steelhead anywhere in British Columbia. There is a flat fee for the steelhead license, same price if you’re fishing for a day or a week. This isn’t the greatest system, it is expensive if you’re only fishing for a day or two but all license fees do go back to conservation measures which might make you feel better about laying down $60 for it.

Third part of your steelhead license is your Classified Waters License. If you’re a BC resident this is easy, there is one license that covers all classified rivers. If you’re not a BC resident then it gets a little more complicated. You have to know what rivers you’re fishing and on what day you’re fishing them. Then you have to buy a classified waters license for each of those days. Best advice when it comes to buying your Classified Waters License is wait. Wait until you know exactly what rivers you’ll be fishing. Good thing is you can always add these licenses by logging in to the licensing website with your assigned angler number and purchasing them as needed. Do it on your smart phone and keep a copy of it on there. Legally you are suppose to have a printed and signed copy of all your licenses.

CLOTHING FOR A  STEELHEAD TRIP

If you’re going on your first BC steelhead trip it is a bit hard to know what to bring, especially when it comes to comfortable clothing and the essentials. Packing clothing that is lightweight and warm will be the most important element of packing for your trip. If you’re not comfortable on the water, it can be a long week of fishing and a few tips on what to pack can make for a much more enjoyable steelhead experience here in British Columbia. Here’s what to pack for your BC steelhead fishing trip…

The key is to stay warm and dry. Without those comforts you’ll enjoy your trip significantly less, we see it often with ill prepared anglers. Remember, if you’re flying domestically within BC there are weight restrictions on baggage. It is always a good idea to wear as much clothing as possible when flying, this can save a trip if a bag doesn’t show up. 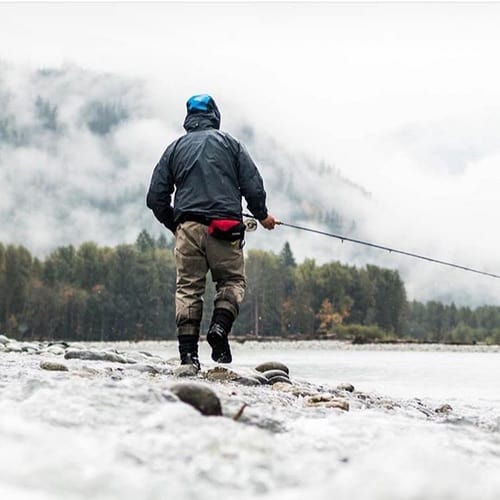 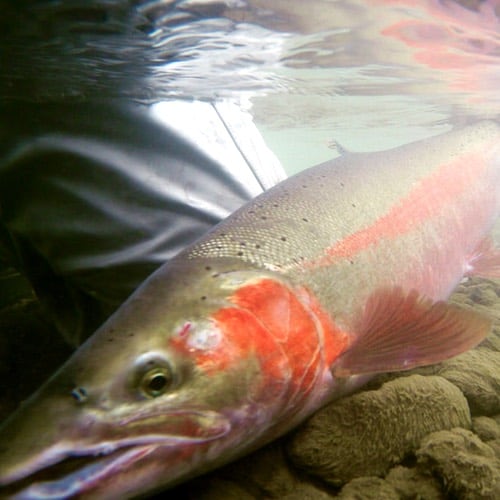 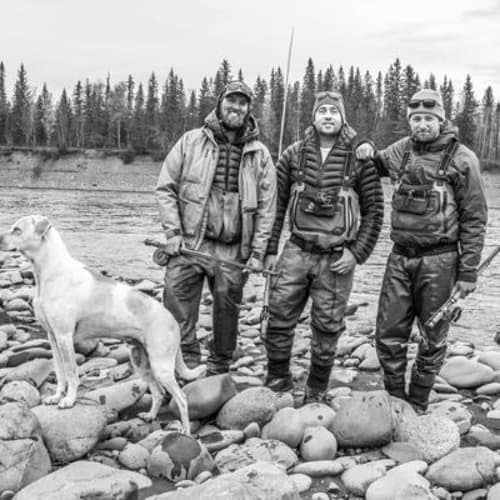 Proud to be the trusted source for the best fishing trips in BC.

Nothing beats local knowledge. Our staff is made up of  BC’s most respected and experienced fishing guides.  We have of the best BC fishing trips right here and our top rated booking services ensure you always get prime dates, the right pricing and honest advice. Have a look at what our clients are saying and we’ll look forward earning your business.

Getting started planning a trip is easy, simply fill out our online contact form or call our office toll-free 1-877-902-3393.  We’ll get back to you right away with seasonal availability and specific pricing. We look forward to earning your business, thank you.